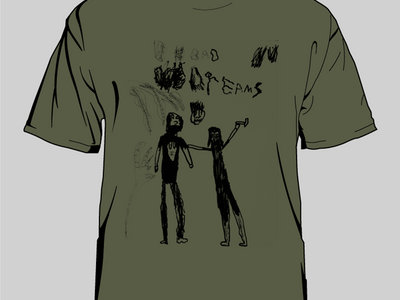 Back in 2004 I released a CD on Troniks called "Bad Dreams". About 10 years later, when my son Leo was around 6 or 7, he came up with a heavy metal band called Bad Dreams. They had a mascot kind of like Iron Maiden's Eddie... but his was named Larry. He drew this picture as one of their album covers. Thats Larry with the Axe. When I decided to do a digital issue of Bad Dreams, I changed the artwork to Leo's drawing. And now we have it available as a shirt!

ships out within 5 days
7 remaining